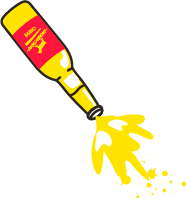 Inspector is considered the representative band of Mexican Ska with more than 25 years of uninterrupted career; the band was formed in 1995 in San Nicolas de los Garza Nuevo Leon by Jesus "Padrino" Arriaga, saxophonist and composer.

Shortly after, Homero Ontiveros joined the project on keyboards and Javier Sanchez "Big Javi" who with his notorious voice timbre, the combination of intense lyrics of love and heartbreak, hard-hitting songs, music and interpretation of the band have resulted in a unique style. After several changes the rest of the current line up are: Fabian D. on Guitar, Armando Chapa on Drums, Gil Treviño on Trumpet, Luis on Trombone, Alexis Manjarrez on Alto Sax and Jose Honorio Osuna on Bass. Their debut album "Blanco y Negro" marks a before and after in the Ska Two Tone movement in Mexico; their second album "Alma en Fuego" awarded with Platinum Disc for its high sales and their outstanding albums "Inspector" and "Ska a la Carta" have delivered us songs that have become part of the culture of the Mexican people. In 2018 they deliver us their most recent material "Paginas en Blanco", an album with 10 unreleased songs of which the first official single "Pánico" can already be heard in all digital platforms.